Sacramento, CA -- A new report finds on average 1.7 percent of vote-by-mail ballots cast in California have been rejected over the past decade. In three counties studied, young and newly registered voters were more likely than older voters to have their ballots rejected. 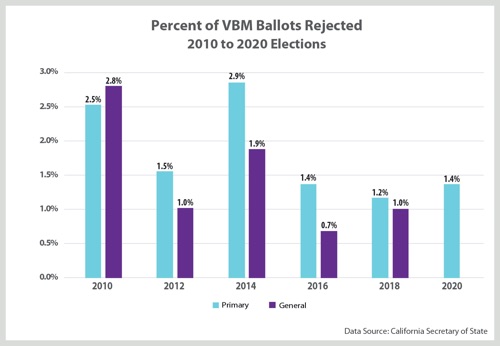 “Casting a vote-by-mail ballot is an important safety measure to ensure people can vote during the coronavirus pandemic without putting their or other’s health at risk,”, said CVF's president and report co-author Kim Alexander. "But it shifts responsibility for getting it right from poll workers to voters. Late return and envelope signatures missing or not sufficiently matching voters’ signatures on file are the leading reasons why some ballots are rejected.”

“Young voters have several factors working against them. They are new to voting, less familiar with the U.S. Mail, and lack experience making a signature,” Alexander said. Older voters were more likely to neglect to sign their envelopes, the study found. 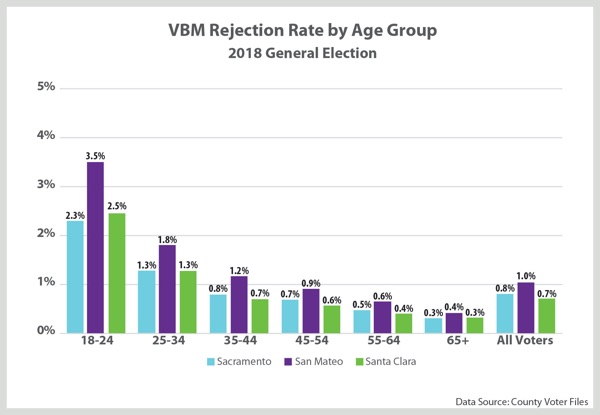 Lateness was the leading reason for ballot rejection in San Mateo and Santa Clara counties, while in Sacramento it was mismatched signatures.

For the November 3, 2020 Presidential Election, all active, registered voters will be sent vote-by-mail ballots and can also vote in person, giving Californians voting options under executive orders and emergency legislation enacted earlier this year.

Counties must contact voters with missing or mismatched envelope signatures and help them submit a valid signature so their ballots can be counted. In the three counties studied, on average 54 percent of 2018 election ballots challenged because of signature problems were “cured” and counted through this outreach.

In Sacramento and San Mateo counties, all but a handful of ballots rejected as “too late” were returned by U.S. Mail. California law requires counties to count vote-by-mail ballots received by 8 pm or postmarked by Election Day and received within three days (extended to 17 days for November’s election). In Sacramento, the CVF study found across three elections, most “too late” ballots were postmarked after Election Day and could not be counted even with the grace period.

“Voters who want to vote closer to Election Day should return their ballots in person to a drop box, voting site, or their county election office,” said Cathy Darling Allen, CVF Board Chair and Shasta County Registrar of Voters.

CVF also advises voters to check their registration status and sign up for ballot tracking. Voters unsure of what their voter registration signature looks like can refer to the one on their California driver’s license or ID since it is the one on file for voters who register online or through the DMV.