This edition of CVF-News highlights our new report addressing harassment of election officials and several other related reports and developments that have emerged in the two weeks since our report came out. We deeply appreciate the commitment displayed to shedding light on the threats received by election officials. And we are especially thankful to Craig Newmark Philanthropies whose support made CVF's report possible.

Working on this project has been one of the most challenging and heartbreaking experiences of my career. It has been traumatizing to learn of the pain and suffering so many election officials are enduring in the wake of the 2020 election; I cannot imagine how difficult this is for those who are directly experiencing it.

At CVF we are working to develop and fund initiatives to help address the challenges election officials face, including advocacy for sustained federal and state election administration funding, networking within the U.S. elections community to support election officials, and reducing harmful disinformation while increasing reliable trustworthy information. If you would like to be involved or can help please let me know. We are all in this together. 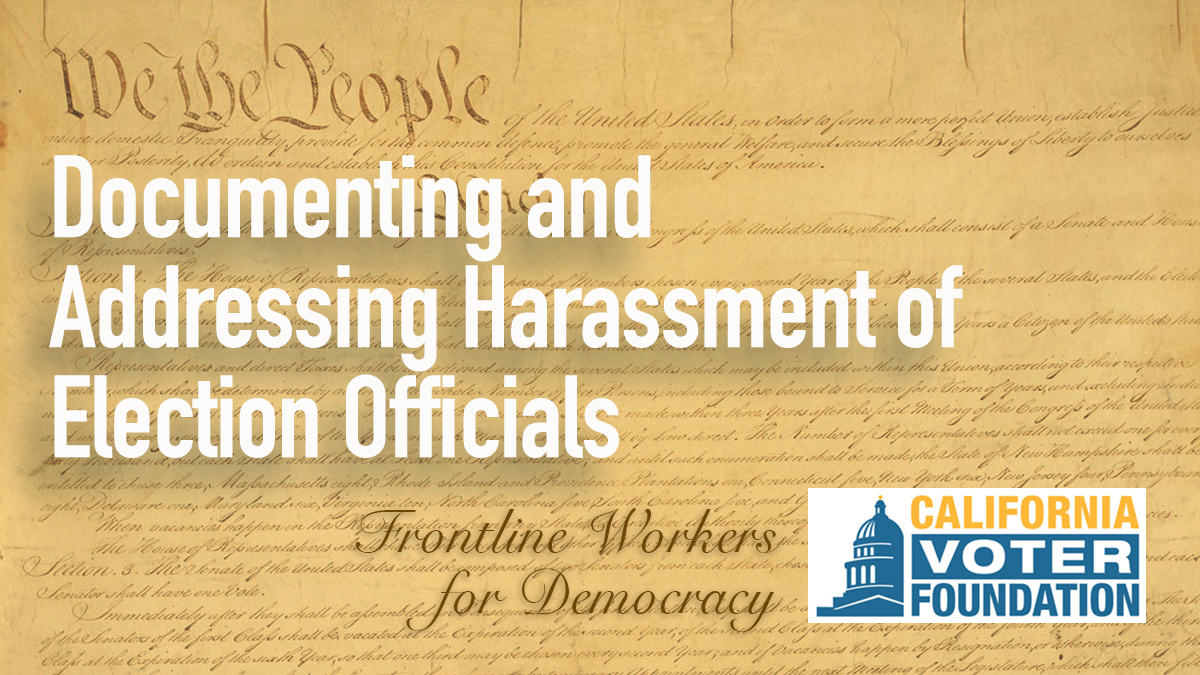 On June 8th, CVF released a new report, “Documenting and Addressing Harassment of Election Officials” featuring findings gathered through interviews with eleven election officials from six states along with eight of the nation’s leading election experts.

The report found that ten of the eleven officials interviewed endured death threats, other threats or abusive language and makes recommendations for improving the safety and security of U.S. election officials. The report is available online at:

To help disseminate the findings, CVF held a webinar on June 9th, with a presentation by the report's author, UC Berkeley Master of Development Practice graduate Grace Gordon followed by a panel discussion featuring Matt Masterson, Stanford Observatory Fellow, Tiana Eps-Johnson, Executive Director of Center for Tech and Civic Life, and Amber McReynolds, CEO of National Vote at Home Institute. A recording of the webinar is available on CVF's YouTube channel and the slide deck is on CVF's web site. The report was featured in Electionline and in an in-depth interview on KQED News; CVF will continue to share the report findings in upcoming interviews, meetings and webinars.

Harassment and threats against election officials in the news

Last week, the Brennan Center for Justice and Bipartisan Policy Center released Election Officials Under Attack, a joint report in collaboration with the Ash Center at Harvard that was the result of several months of interviews with election officials and experts. The report features several conclusions similar to CVF's report: that violent threats against election officials reached alarming levels in 2020 and continue into 2021; disinformation is making election officials' jobs difficult and dangerous; and local election officials are under-resourced and carrying an unsustainable workload.

This report's release was accompanied by extensive news coverage and a Virtual Summit featuring election officials discussing their experiences and researchers' observations, and a video with testimonials from election officials with actual audio recordings of threats made against them (like CVF's report, this video features a trigger warning to viewers that the content is disturbing). Other related reports have recently been issued as well:

Ideas for addressing these threats and their impact are featured in a CNN opinion piece co-authored by the Brennan Center's Lawrence Norden and the Bipartisan Policy Center's Matthew Weil. In Election workers protected U.S. democracy. Now, we must protect them, Norden and Weil provide concrete steps the U.S. should take to address threats to election officials, including the Justice Department convening an Election Threats Task Force to nationally coordinate a stronger response to these attacks; social media companies identifying and amplifying election officials' content on their platforms; and states passing new laws and appropriating funds to provide more security for election officials and workers.

About the California Voter Foundation

The California Voter Foundation is a nonprofit, nonpartisan organization working through research, oversight, outreach and demonstration projects to improve the election process so that it better serves the needs and interests of voters. CVF-News is a free, electronic newsletter featuring news and updates about the California Voter Foundation's projects and activities.